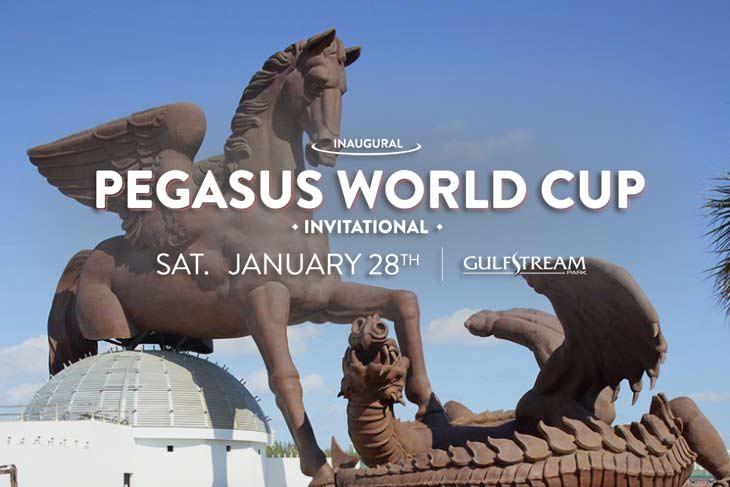 The biggest discussion/question/argument in horse racing this week will not be centered around horse racing partnerships. No, all rhetoric this week will surround the world’s richest horse race, the first ever running of the $12M Pegasus World Cup. The mile and an eighth race will be run this Saturday, January 28 at Gulfstream Park in Hallandale Beach, Florida and features a rematch between 2016 Horse of the Year, CALIFORNIA CHROME, and the only horse to beat him in 2016, Eclipse Champion for three-year-olds, ARROGATE.

While there are ten other top quality horses competing in the Pegasus, let’s face it, they are all battling for the minor awards. Both Champions have otherworldly credentials as they ready for the Battle in Miami.

California Chrome joined the legendary John Henry as the only horse to win multiple Horse of the Year honors in non-consecutive years on the heels of his six stakes wins in 2016. His wins included the $6M Dubai World Cup and the GI Pacific Classic. Chrome is the all time horse racing money leader with over $14M in career earnings and has won eight Grade I races, including the 2014 Kentucky Derby and Preakness Stakes.

Arrogate didn’t start his career until this past April, when defeated by Little Red Feather Racing’s Westbrook in his career debut (ok, so he had a terrible trip that day and was probably best). Since that time, he’s reeled off five straight victories, including a thirteen and a half length romp in the GI Travers at Saratoga last summer breaking a 37-year-old track record in the process. Then, he defeated Chrome on the square when the two faced off in their first meeting in the 2016 Breeders’ Cup Classic last fall at Santa Anita.

Let’s take a look at the rest of the tale of the tape, including the human connections associated with each of the Superstars.

California Chrome is trained by one of the kindest, classiest gentleman in our sport, Art Sherman. The 79-year-old Sherman became the oldest trainer to ever win the Kentucky Derby and actually was the exercise rider for 1955 Kentucky Derby winner Swaps. A racing lifer, Sherman has enjoyed the ride of his life with California Chrome and has managed his career perfectly.

Victor Espinosa will pilot California Chrome. Ironically, it was Espinosa who rode Baffert’s American Pharoah to his Horse of the Year title in 2015. Espinosa was criticized by many for his questionable “looky-loo” ride aboard Chrome in the BC Classic.

Arrogate retains the services of the venerable Mike Smith (below). Like Baffert, Smith is a member of racing’s Hall of Fame and has won more Breeders’ Cup races than any other jockey in history. 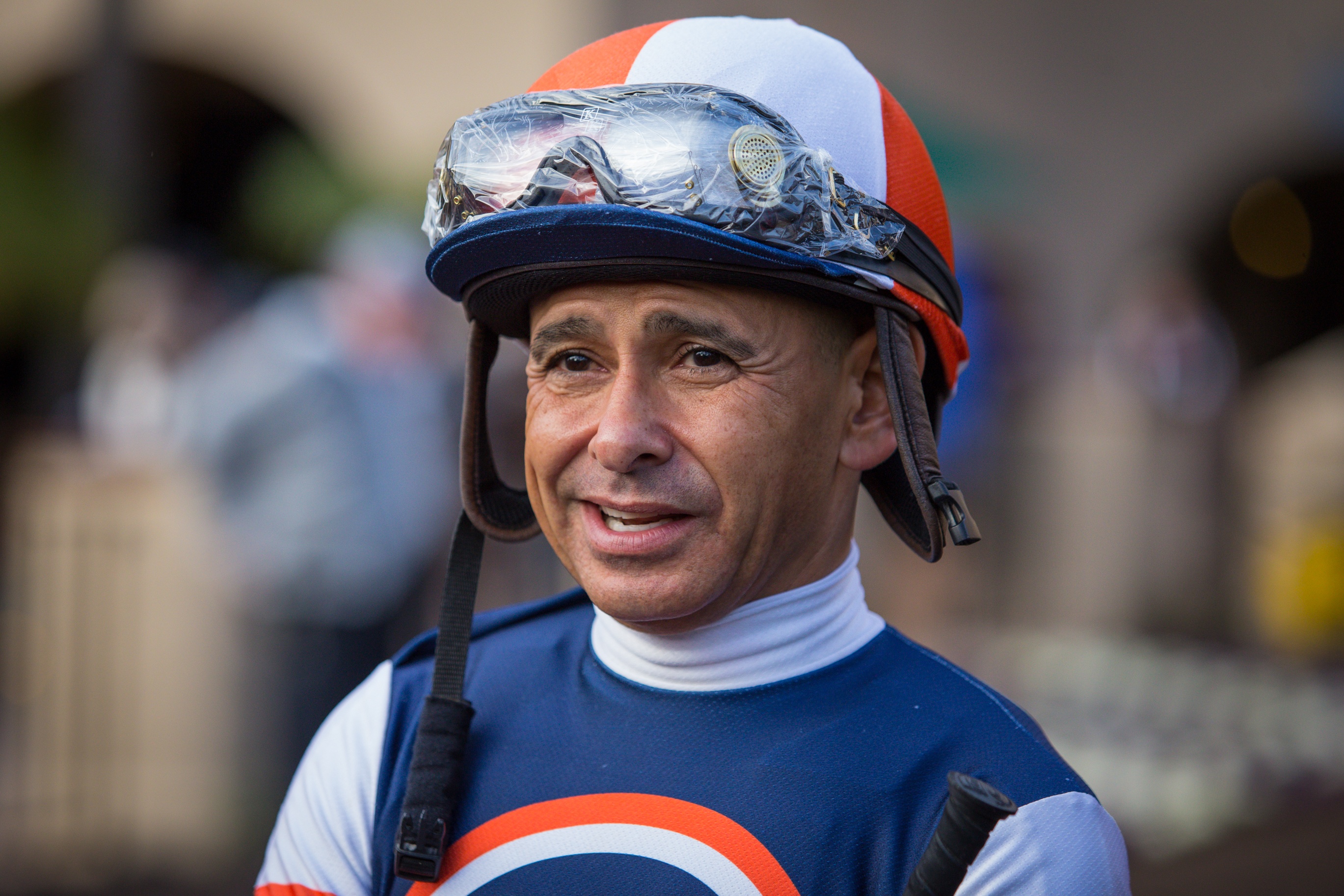 Chrome was collared by Arrogate only in the last sixteenth of the mile of the BC Classic and should benefit by the shorter distance.

Gulfstream Park is known as a “speed favoring” track. Although Arrogate went wire to wire in the Travers, his style is more of a stalker than a confirmed need the lead type. Chrome prefers to be on or near the lead and has run many of his best races in wire-to-wire fashion (see Chrome winning the 2016 Pacific Classic below). 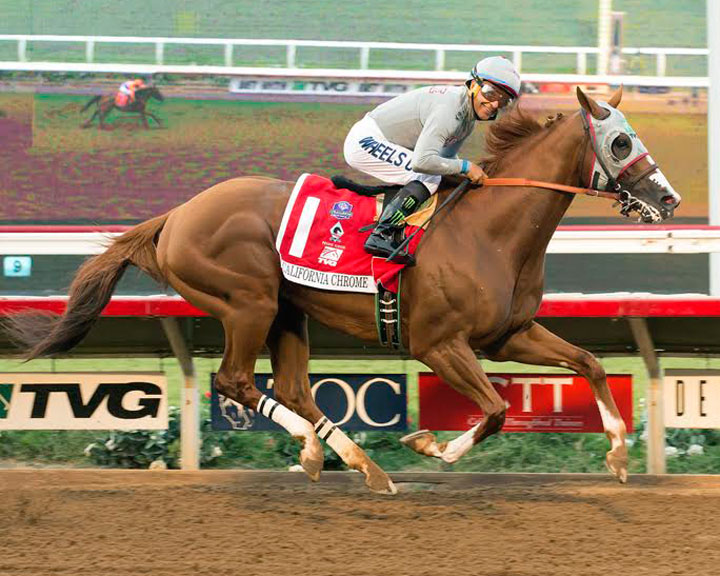 Chrome was able to get a nice prep race in at Los Alamitos in December where he demolished a group of outclassed rivals in a race created specifically for him. He has trained brilliantly over the Gulfstream surface, including a :58.81 five furlong drill on Saturday.

Arrogate has not run since the Breeders’ Cup and his training schedule has been affected by the recent rains in Southern California.

Aside from the aforementioned questionable ride in the BC Classic, Chrome had every chance to beat Arrogate when they met for the first time. In our eyes, Arrogate was simply the better horse that day.

Arrogate is owned by one of the greatest racing operations in the world, Juddmonte Farms. Recently awarded the Eclipse Award for outstanding owner, Juddmonte campaigned 2016 Eclipse Turf Champion, Flintshire and was also named Champion owner in 1992 and 2003.

California Chrome is owned in a partnership between Taylor Made Farm, a goliath in the racing and breeding industries, and Perry and Denise Martin, who originally named their stable Dumb Ass Partners. 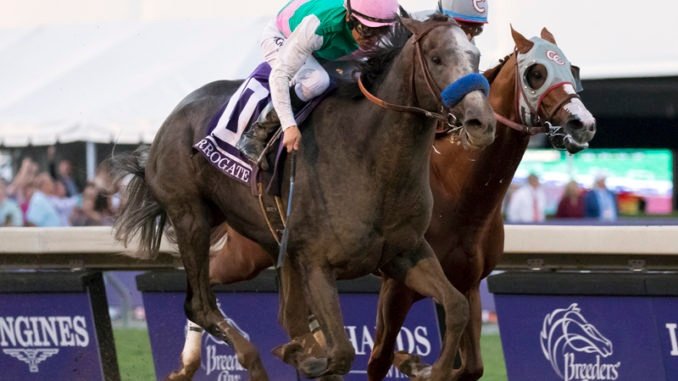 The Pegasus will be California Chrome’s swan song as he heads to the breeding shed to begin his second career as a stallion. Credit the Sherman family, Taylor Made, the Martin’s for generously allowing us fans to participate in the champion’s career. We are sure the “Chromies” will be out in full force on Saturday.Arrogate is the “now” horse. Only a four-year-old, the already accomplished Arrogate has a bright, bright future ahead of him and he’s already proven he can beat Chrome. Most will make Chrome a sentimental choice but, as we’ve learned over the years, you should not bet with your heart. Arrogate is simply a better horse right now and has Hall of Fame connections in his corner.

Ultimately, we think this highly anticipated rematch in the first ever Pegasus World Cup will look like an exact replica of the Breeders’ Cup Classic, with Arrogate nailing Chrome right on the wire and winning the world’s richest horse race.

CHROME OR ARROGATE? WHO DO YOU THINK WILL WIN?

Want to learn more about horse racing partnerships and how to get involved? Please contact us any time or check out our E-book!