Horse Racing Partnerships 101: How We Treat Our Horses 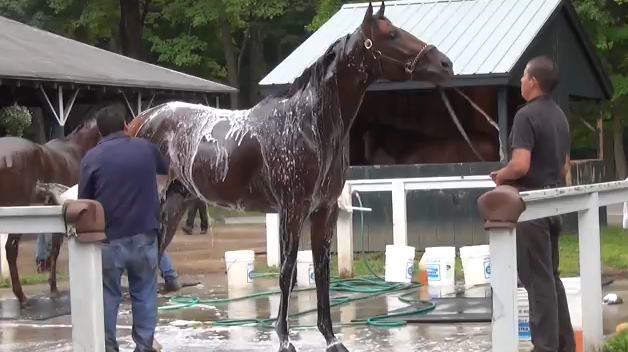 In the aftermath of the Preakness Stakes last weekend, I was expecting that my non-racing friends and family would ask me about Exaggerator, the horse who finally defeated his rival, the undefeated Kentucky Derby winner Nyquist, in a thrilling race on Saturday afternoon. Who owns him?  Is he part of a thoroughbred partnership? Much to my dismay, my post-Preakness conversations were not about the efforts of Exaggerator and Nyquist.

Rather, they were focused on Homeboykris and Pramedya, two horses who died earlier in the day. I had seen social media quickly blow up with links to articles about these deaths on Saturday afternoon, but I was not expecting them to be the lead story of the weekend. A common theme among the sources that was noted by myself and fellow horse racing fans was that these news outlets ignore horse racing 362 days a year (with the exceptions being the dates of the Triple Crown races). Thus, their limited “coverage” is skewed at best and wrong at worst.

We cannot help but become frustrated when my social media feeds are swarmed with comments from anti-racing people who come out of the woodwork whenever the mainstream media decides to shine a spotlight on the darkest parts of Thoroughbred racing. Unfortunately, racing suffers immensely from a lack of central leadership, and this deficiency often prevents the sport from standing up for itself when necessary. However, this does not mean that racing fans, those who are most frequently questioned about the sport that we love so much, cannot stand up for it and educate our friends and family who are willing to listen.

When a Thoroughbred dies of a heart attack, the casual observer needs to understand that the horse was not drugged, raced, or abused into cardiac arrest. He or she must realize that “drugs” should not be the scapegoat every time a horse suffers a catastrophic injury. They need to know that strict testing programs are in place to catch and punish anyone who tries to cheat and/or compromise a horse’s safety. Those who hate horse racing claim that people within the industry are apathetic toward equine fatalities. We wonder how many of these people have seen the outpouring of emotions at the track and on social media when a horse dies on the racetrack.

If the mainstream media will not tell the masses every part of racing’s story, then the knowledgeable racing fan must teach the casual observer that a riding crop/whip/stick is a tool, not a weapon. Like any tool, it is effective when used correctly. When it is misused, criticism of the user, not the whip itself, is warranted. If PETA and other animal rights groups will not acknowledge the countless organizations that exist to rehome ex-racehorses, then it is our duty as people who love racing and know about racing to debunk the ridiculous myth that all “slow” horses are sent to slaughter.

At first, we hated that tragedy has dominated my conversations about Preakness weekend. However, I have taken these discussions as an opportunity to teach those who would otherwise be left to form their opinions about horse racing from the warped portrait painted by mainstream media. I hope that people ask me the tough questions that mainstream media sources choose not to answer unless it will result in increased viewership and/or readership. I hope all passionate fans join me in embracing this questioning. The horse racing industry is far from perfect, but we should be the ones telling our story.