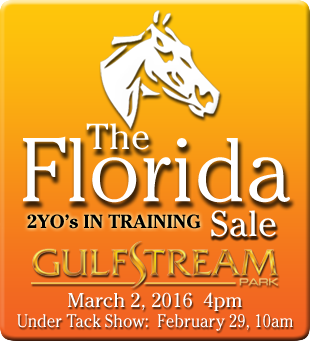 Two-year-old in training sales are an exciting time of year. Winter is ending, the Triple Crown season is upon us and the hope of a new crop of horses fills the air. For the major horse racing partnerships, this is the biggest and usually best chance to re-stock the barn for the upcoming summer of 2YO racing.

Fasig-Tipton kicks things off next week, followed by OBS two weeks later. These two sales can set the tone for the year, especially when it comes to the freshman sires. There are 30 new freshman stallions in 2016 with 14 represented in the Fasig-Tipton sale.

A big topic entering the sales this year according to pedigree expert Robert D. Fierro appears to be about sire lines. Normally, two-year-old in training sales are more about performance (ie breeze times) than the pedigree page. However, if you look deeper into the Fasig-Tipton catalog page two things jump out. 6 of the 14 freshman sires are from the A.P. Indy sire line, while over 50% of the catalog is made up of horses from just three sire lines…A.P. Indy, Unbridled and Storm Cat.

It will be interesting to see if the traditional model of faster breeze times equaling higher sales prices is altered by the current pedigree pages. Speaking of breezes, gallop-out times were all the rage in 2015. We will keep a close eye on this trend again in 2016.

Another interesting tidbit… of the freshman stallions represented, many look like they came with their big guns. Gemologist is represented by three nice colts, Stay Thirsty has two colts and Dialed In has an interesting looking filly we bet will breeze fast. Tapizar, who was extremely hot at the yearling sales, has two colts.

The most popular freshman sire at Fasig-Tipton is Union Rags with 8 progeny scheduled to go through the ring. Bodemeister and The Factor have six each. All three were extremely active at Keeneland so  these 20 horses may be a key indicator of how the entire freshman class will perform.

The returning sires look like a who’s who of the Leading Sire lists with Tapit represented by 7 colts. Usually Tapit fillies bring in the big bucks, but I have a feeling a $500,000 average sales price is not out of the question for these monsters. Perennial top 10 sire Malibu Moon is the most represented at the sale with 9 progeny.

Overall, the industry will be looking for continued forward momentum. Yearling sale averages rose for the 5th consecutive year in 2015. Last year’s 2YO record average of $78,019 was the 4th consecutive year of growth. With the latest stats from the Jockey Club Fact Book just released, it appears the downward circle caused by 2008 bottomed out in 2011. Recent market fluctuations may dent the first sale, but all signs point positive that 2016 will be an exciting year at the 2YO sales.